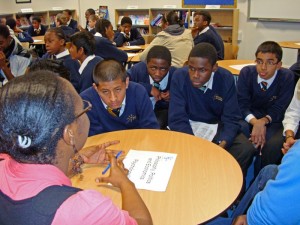 A fantastic and ongoing response to Urban Synergy’s first University Academic Seminar at Prendergast School. If you missed the event on 18th September, you missed a hugely inspiring evening, hosted by Oxford University under-graduate, Michael Isola with Urban Synergy.
A packed hall of over 150 young people plus parents, supporters and mentors heard a panel of fired up young undergraduates from several top universities (Oxford, Cambridge, Imperial College, Warwick etc) inspire the audience towards academic success. Several speakers dispelled the myths that university is unattainable or isn’t for young black people. They shared their own experiences of their journey to get to university, how they were getting on and their future aspirations. Sam Bowen, the Gifted and Talented Coordinator at Prendergast said: “… It was a great success and I’m sure some of our students have taken on board the motivational message (I did get asked for a stack of newspapers [from the girls] to read this morning!).”

The success of the seminar has also not gone un-noticed within the hallowed halls of Westminster. Diane Abbott MP has taken an interest in what was achieved at Think Further and we hope to keep Urban Synergy on her radar. Urban Synergy’s First Think Further Seminar Gets Thumbs Up!

With unprecedented attendance at the frst Urban Synergy Professionals Auction, the evening was judged to be a roaring success, thanks to all who came out to support the event.  Urban Synergy raised £3700 from bids during the night and our sincere thanks goes to all those who spent their money on supporting us . The money is being used primarily to fund ongoing projects and new experiences for our mentees and a full rundown of how it has been allocated will be given at the AGM in December.

The London Fire Brigade has won much praise for its ‘LIFE’ programme. ‘LIFE’ teaches young people between the ages of 13 and 17 firefighting skills and the concept of self-discipline and team work alongside real firefighters.
On 28th October, during the Half Term holiday, Urban Synergy mentees and mentors attended Lee Green Fire Station and participated in a number of training exercises designed to help them gain greater self-confdence and team building skills.
Urban Synergy Cohort Leader and Mentee Training Coordinator, Alison says:  “We’re really pleased that the London Fire Brigade (LFB) has accepted Urban Synergy mentees for this type of training. We’re still a relatively young organization but we’re making great strides with the young people we work with and I think this has been recognised by the LFB. The mentees will learn the importance of balancing teamwork with self-reliance, which will help them in numerous life situations. They’ll also be put in situations, which will allow them to practice their problem solving skills.We are sure the mentees understood and appreciated the invaluable and often life-threatening work that members of our Fire Service do every day to help others. 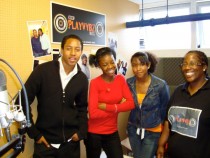 Breaking into radio, television and media environments is notoriously tough to do but in August, four Urban Synergy mentees, aged 15+ were privileged to experience the cut and thrust of radio for themselves.
A visit to internet radio station, Playvybz to learn the ropes of broadcasting allowed them to get inside information on the entertainment business as well as to understand the ins and outs of putting a radio programme together. The young people enjoyed the event immensely, each of them expressed that the day has made them more determined to work in the media. Thanks to Sandra at Playvybz for hosting Urban Synergy mentees.

In Brief: Who’s Saying What About US…?

Deptford Green School ‘Top Tips for Success’ Seminar
SCHOOLBOYS determined to defy negative stereotypes organised an event with US to help inspire them and their peers to achieve their dreams. They were supported by the school’s head of English Jackie Bygrave and mentoring organisation Urban Synergy. Ms Bygrave said: “The boys were inspired by a visit to a slavery exhibition in Liverpool. When we were coming back they said to me that they never see any successful black people, it’s all guns and crime. But I said, ‘Of course there are’, and this has really helped bring that home.
“We now plan to embed the Top Tips Seminar this in the curriculum and do it every year.”

Thank you for your performance at Deptford green school, my children have truly been inspired and motivated by your good work. Crystal (parent) 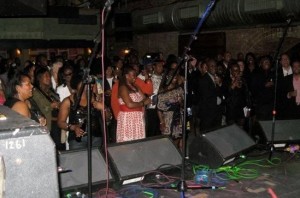 “Excellent work is being achieved by US, its members and the children are so so inspired by their presence.” Tracy Ford

Mentor in the Spotlight…

Raki Gillen, an OMV Oil Trader is an Urban Synergy volunteer who for the last 5 months has been a mentor to a 15 year old student. Getting to know her mentee has been relatively easy but the mentee/mentor relationship hasn’t been without its bumps. Raki was able to organise a two-week work placement for her mentee. in August. But as she tells Urban Synergy, her efforts to help her mentee secure the placement didn’t stop there.

My mentee has been shadowing a number of lawyers at the Goldsmith chambers which she has thoroughly enjoyed. We had a few hairy moments involving London Transport but after a million trial runs of her journey prior to her start date, a few early morning pick ups from me and one day of yelling we got there and I am proud to say, her second week went by without a hitch. She even worked out alternative routes on her own when things went wrong.

I am so very proud of my mentee. At the end of last term she partook in some end of years examinations, mock exams as well as the real thing for Religious Education, which counts towards 50% of her fnal GSCE grade. We were also given her predicted grades for her GCSE’s and both her mother and I were distraught by the Ds, Es and Fs predicted.
However after a good talking to, she buckled down to revise for her exams and she got an A in RE…. As you can imagine both her mum and I are very proud of her and we hope this will set the tone for her exams next year. It’s certainly given her something to work towards and she knows we are all rooting for her. From all at Urban Synergy, big congratulations and ‘thank you’ to Raki for being a constant support to her mentee
over the last few months.

Deptford Green Boys Get Taste of the Boardroom

Deptford Green London Challenge Boys, visited Millwall FC to meet with Heather Rabbats CBE, their Executive Chairwoman. Thanks Heather and her staff, in particular Jason for showing us around and making it such an interesting, informative, enjoyable and inspirational trip!

Nine young people attended a workshop led by Paul Lawrence at Reuters, courtesy of Urban Synergy in August. The workshop was a direct response to the fact that many young people are not equipped to deal with difficult situations in their day-to-day lives, whether in communicating with their peers or with authority figures. The workshop was designed to help them review their behavioural responses in different circumstances through role play and to give them the tools to appropriately react and communicate effectively in adverse situations. Urban Synergy would like to thank Paul Lawrence for putting on a stimulating and interesting workshop, which certainly got the young people talking.

So, did they think it was worthwhile? Kateri, age 16 says: “I learnt a lot including a few behind the scenes tricks on how to handle my parents and difficult situations.”
Another participant said: “Learning about body language, tone, volume, word and speed will really help me. I’m glad I came along.”
But perhaps the next comment sums up the sentiment by the entire group on just how enjoyable and effective the workshop was for them. Rushain, 16 said: “Make it a bit longer next time.”  So he defnitely enjoyed it then!
Don’t worry, Rushain… Urban Synergy is listening and the Difficult Situation Workshop will be rolled out in a slightly longer format very soon!

A PDF version of the Newsletter is available here.