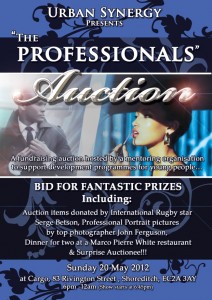 A fundraising auction hosted by a mentoring charity to support development programmes for young people….

An exciting evening of fun and entertainment is being held to raise money for programmes to support and mentor young people in London.

With Comedy, live entertainment and the chance to dance the night away, the highlight of the event is a special fundraising auction to raise money for Urban Synergy.. The Mentoring Resource Pool.

Live performances on the night

*Cargo imposes a strict door policy with ID scanner, please have a photo ID with you to avoid difficulties upon entrance.

Note: Tickets can only purchased online until 12pm on 20th May.