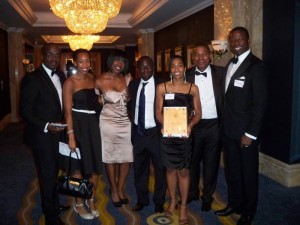 Last week, Leila Thomas, founder of Urban Synergy thought she was simply a guest among hundreds enjoying dinner at Race for Opportunity’s prestigious 15th anniversary charity awards in London’s Park Lane Hilton. Instead, she walked away with a surprise honour, winning the Race for Opportunity Leadership Award.

Leila, who was honoured amongst established and leading players in public and business life including The Home Office, the Army, Bristol City Council, American Express, CITI and Asda, was nominated for the discretionary award by RfO board members. The award is given to an organisation or individual that has demonstrated leadership with clear goals, action and evaluation to achieve exceptional progress in advancing the race equality agenda. Leila’s dedication to helping young people achieve all that they can with opportunities was recognised by the RfO board and she was taken completely by surprise when her win was announced as she did not know that she had been nominated. Leila’s Leadership Award was presented by Patrick Clarke, Director of Connections, EDF Energy.

Leila said of her win: “I was totally shocked when my name was announced and I’m still surprised that I was not only nominated but won the award. It’s a great honour for me personally and wonderful to have Urban Synergy recognised in this way. There are several other worthy mentoring organisations but I’m delighted that the RfO board saw a spark in Urban Synergy and recognised us for our innovation and positive contributions to improving the lives of the young people we serve.”